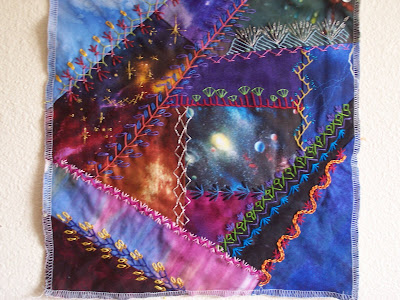 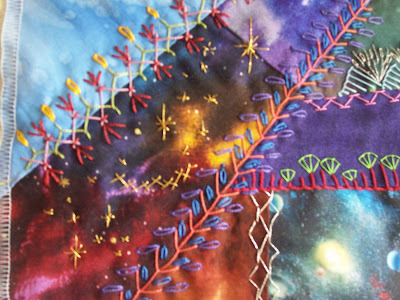 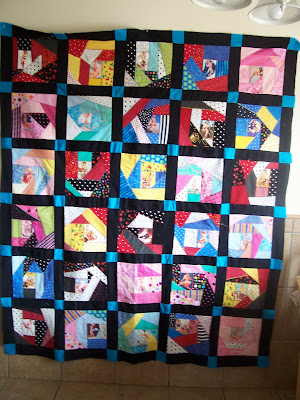 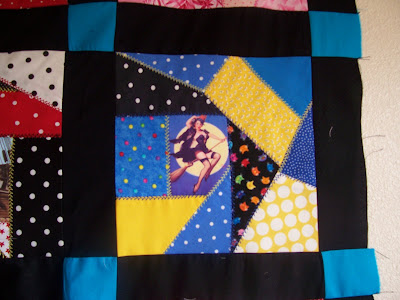 Hello All
I have been busy this week. I got one block done on my "Boldly" quilt. It isn't too bad. I need to bead this yet. I think I like the green flower border the best. Only 15 more to go. LOL
Then I spent the rest of the week on the Pinup quilt. All the embroidery is done by machine using 2 strands of thread. For the liitle accent squares in the sashing I used my husband's favorite color. His first car was "71 Cougar with a 351 Cleveland Engine and PosiTrac. This color that he calls Robin's Egg Blue is the exact color of that car. So I put it in in Rememberance of that former love. Now I have to wait for the fabric I won on Ebay for the border. He sure is a spoiled man. He's so lucky to have me.
That's about it. More CQing to do
LAter,
Lauri
Posted by Lauri at 1:13 PM 2 comments: 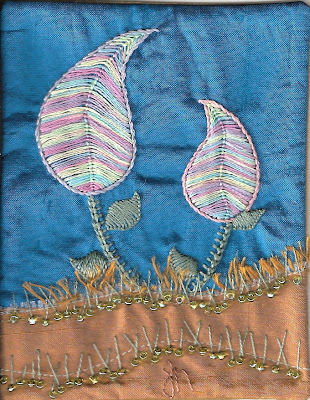 I just received this in the mail from Jo in New Zealand. Isn't it beautiful? I think I will start one of those fancy corkboards to include all the things I get from swaps and RR from all over the world. Kinda of like a living art collage that will keep growing.

Jo had an ArtMEME on her blog a while ago. For those of you who don't know what that is. Here are the guidelines. When someone issues an Art MEME, they agree to give a piece of their art to the first five people who respond. In exchange those five people agree to put on their blogs, websites or groups that they are doing this challenge too and that they will in turn give a piece of art who respond to them and agree to pass on their work. (Does that make sense?)

I in turn offered my work in exchange. But I have had no takers, so here is your 3rd and Last chance to have an original piece of me . So leave a comment below and I will make up something for you. You need not be in the USA , I will ship anywhere

So this is what Jo sent. Her stitching is so dainty and I think the paisley is great. I have a fascination wit them myself. She did a great job. I have already written to thank her but I wanted all of you to see her beautiful work also. Please go check out her work on her blog. I have her in my links on the sidebar 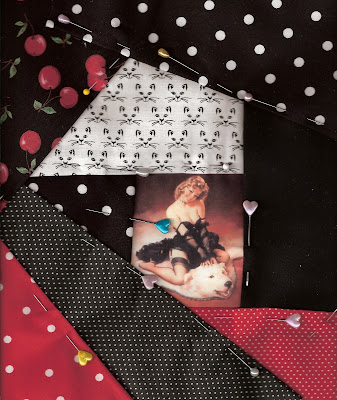 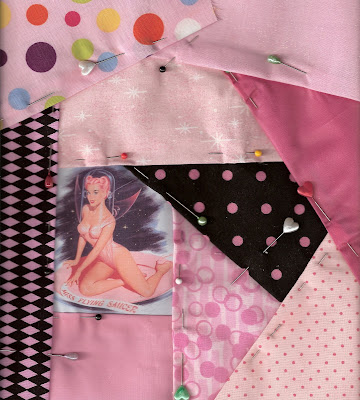 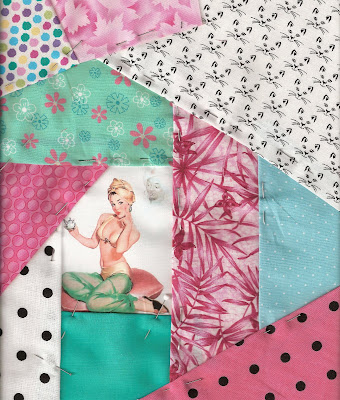 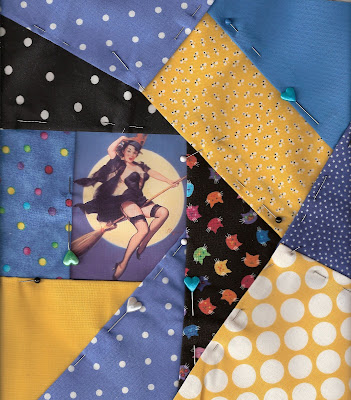 This is what I have been working on for the past couple of days. My hubby always has cold feet and he loves to watch movies on his big screen tv with surround sound. The only problem is that it is in the basement, so I decided to make him a quilt to cover up with.
I just love these pinups. Personally I think they are cute. The lady at Joann's about had a heart attack when I showed her what I was doing. She said " How could you do that? I would never put something like THAT on a quilt for my husband!". I thought to myself that she should take a BIG chill pill. I mean if I can't trust my husband after 23 years, then will a slighty risque quilt send him over the top? But I must say he did have fun going over all the pictures to include in the quilt!
There are 30 blocks in this quilt and as much as I love the Hubby, I have 3 more quilts lined up before this one, so I am going to cheat. I am going to do all the seam embellishments by machine.
I am also thinking of making one for my son who is going into the Navy and maybe for the oldest son's 21 birthday. I think I will use 3x4 or 4x6 prints for those though. These seem to get a little lost in the block
Well I gotta go, more blocks to piece, 16 down 14 to go
Later,
Lauri
Posted by Lauri at 9:43 AM 3 comments:

Back to My Roots 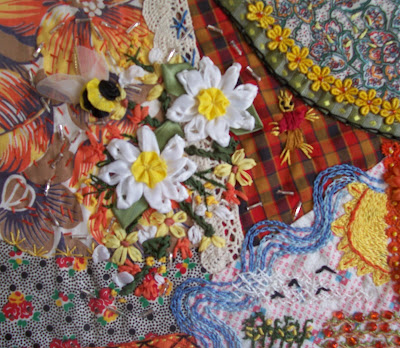 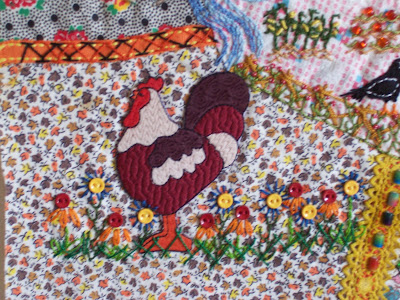 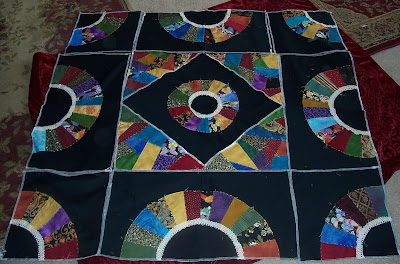 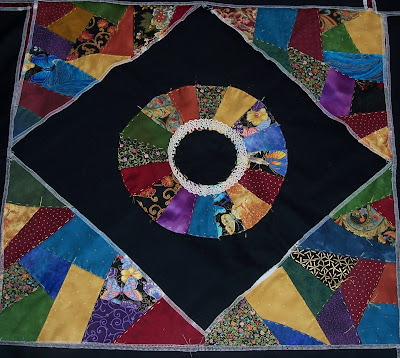 
I've finished my Ugly Duckling block ( I think ) LOL . Janet says that it looks very Kansas. This block just screamed Country, so I went for it.
You see my family is so country it's scary, to a citified girl like me. My paternal Grandpa ,Harry ,was a moonshiner. He used to run moonshine in Kentucky, hiding his wares in watermelons. He later settled down, had 9 kids and became a barber in Cincinnati . His clients included members of the Big Red Machine in the 70's, yes he was responsible for Johnny Bench's haircut, but I hope to God not for Pete Rose's!

My Dad was in the Seminary to become a priest but he dropped out to join the Air Force. Then he met my Mother. She was brought up a Mennonite share farmer in Missouri and Nebraska.

When they married they compromised and became Lutheran and moved to the big city . (Columbus , Ohio and Denver, Colorado)

So you see doing a country theme on this simple for this Moonshine running, hillbilly, dirt busting, Mennonite, Catholic converted Lutheran city girl.

No wonder my husband says I have at least 2 personalities!!

I decided to embrace my inner orange and go for it. So there is ALOT of orange.Who says you can't have glass beads and crows on the same block.
I did cheat, the Rooster is an iron applique and the bumble bee and lady bug are store bought.

I am quite happy with how it turned out. Sometimes you just stop fighting the block and go with the flow.

I finally got " Janet's Fault" basted. This one should end up pretty good if I can translate what I have in my mind onto the quilt. I really like all the black in it.I am going for a very antique look on this one.I have very wide lace like edges done in ecru in mind for the fan edges. Carole Sample's Treasury of Crazy Quilt stitches has a lot of very nice borders in it that should look great here.
I have also heard that her publisher will no longer be printing her book, so if you want it you may have to work fast

I only have one more quilt lined up to piece. It is a 50's inspired pin up girl quilt for the hubby, to keep his tootsies warm in the basement watching movies on his big screen TV

Gotta go do some work 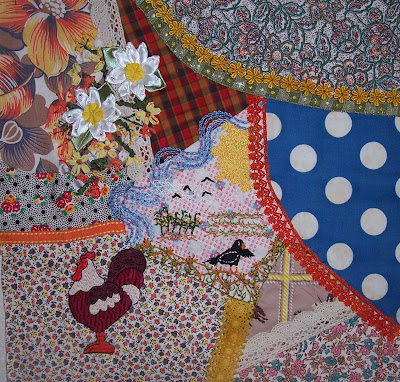 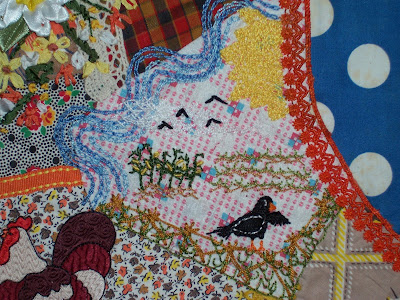 I just wanted to update you on the progress of the Ugly Block.This is the result of about 8 hours of work. Maybe another 20 and it might be presentable!

The gold and orange lace that you see are ones that I dyed with this project in mind. They are pretty intense in color. I am happy with the way the crow turned out, I just did him freehand as I went. I have some bright orange flowers with yellow centers to cover the white polka dots.

The SRE in the corner needs a little more filling out I think.

Next up some button flowers around the rooster and lots of beads and seam embellishments.

Back to the grind
Later,
Lauri 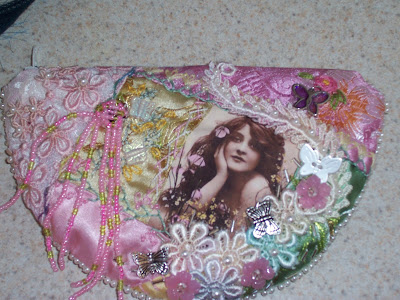 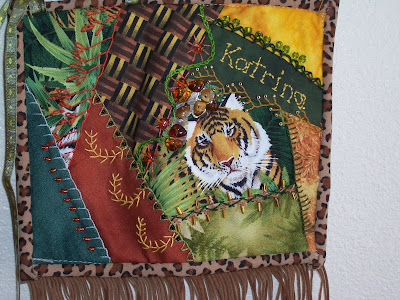 I have had a busy week . I finished up Katie's mp3 case. I also made a little purse. It was to be for a friend I made while working at Joann's, everytime I go in to purchase even more fabric I don't need she always says "When are you going to make me something pretty?'" So the little purse is the result. I have never made one up before. I really like how it turned out and I don't want to give it up.The hardest part was to get the zipper to lay right. So we will see if I give it up!
I finally got "Janet's Fault" to talk to me. I am still basting it and I think this one will turn out well too. I will post as soon as I get it basted.
No progress on "Boldly" it's not talking yet, but I am confident that it will come along when the time is right

I have gotten my rhythm going on my CQing lately. Who would have thought that being able to breathe and swallow without pain would make such a difference?

Well back to work