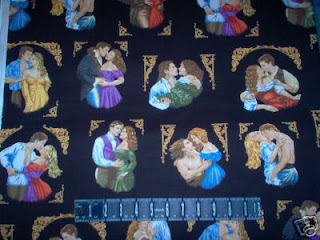 I am in a new Round Robin. This is a pick your own theme one. You pick a focus fabric and make a block using it. The you send that focus fabric on to the others in the RR.

My Dilemma? I can't pick which of the fabrics above to use. I am leaning towards the Romance Novel fabric. I am very into theme projects. However I know that lots of people aren't. I think CQers might have an easier time using the quilting ladies for the focus fabrics.

So here is my question especially if you will be in this RR. Which one would you rather work on? You can click ( or is it double click?) on the pictures to get a better view.

Please drop me a comment and let me know. I DO read all my comments, I just don't always have time to write back to each person, but believe me I really do enjoy and appreciate them. 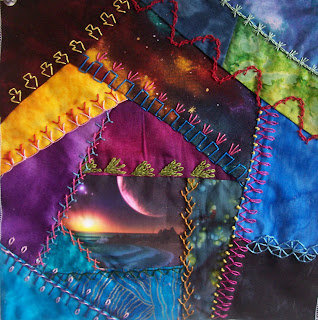 Hello All
Here is some of what I have been working on. This is number 2 of 16 ( I think). This is just a start, it still needs a lot of work. I need to add more to some of the seams and of course the beads. I think I will wait until I have a few more started so I get more of an idea of how much embellishment is needed.
In the bottom right corner is a stitch fast becoming one of my favorites. It is the hot pink and yellow one. I call it a buffalo head stitch. Actually it is just a fly stitch with a detached chain instead of a straight one to finish it.
The red wavy line is done in a barb chain stitch.
The yellow in the top left is from the Carole Sample's templates.These are really useful to keep your work even. They also give you a lot of ideas for new treatments.
Well back to work
Later,
Lauri
Posted by Lauri at 4:55 PM 3 comments: 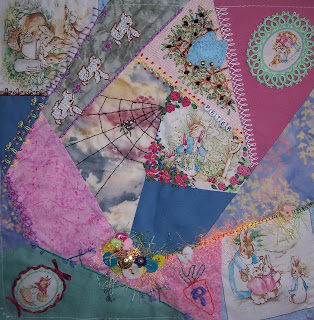 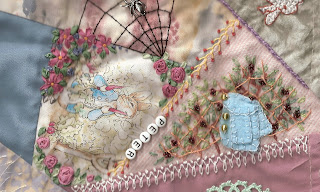 Here's what I have been working on lately.
The first is the whole block , the second is my contribution

Faith's theme for her block was Peter Rabbit. Now it has been a very long time since I read this story. My kids' favorite book was "Dinosaur Dos and Don'ts"

The only thing I remembered was Peter's Rabbit hanging on the bush so that is what I did.

The vines for the bush were done in alternating bar chain stitch. The leaves in detached chain with a varigated thread. A very large loose buttonhole stitch was used for the netting. The net is hard to see but maybe if you click on the picture it will expand enough to see it.

I used some very dark purply red glass beads for the blackberries. 2 beads were sewn on together, then 3 more strung together going the opposite way to make it look more berry like.

I used felt and appliqued the jacket on.

I thought of using embroidery thread and crocheting it in a slip stitch but that would have takens hours and sometimes my attention span is quite short. I must have learned that from my kids. LOL

I also did the yellow featherstitch with the orange french knots above the patch and the white buffalo head stitch below it too.

I was going to add more but the block is getting pretty full and there are at least 2 more people to work on it after me.
This is the last block for the RR I have right now, so I will return to my Star Trek cq " Boldly"
Let's see if it is talking to me now. If not I have about 20 different UFO's to work on 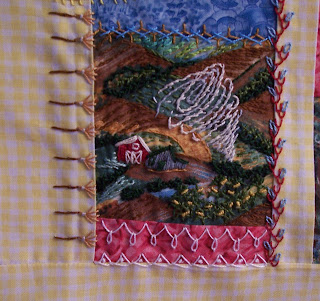 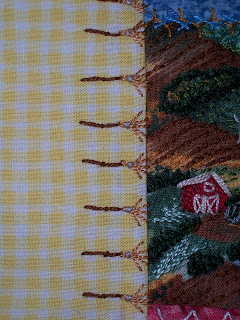 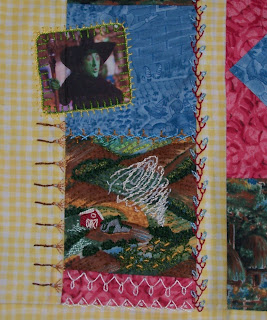 Hello All
Here is the work I have done on Leona's Wizard of OZ block. I must say it was a challenge as I am not a fan of the movie or of Judy Garland. But I guess that is part of the point of a Round Robin isn't it? To challenge yourself and do something you normally wouldn't do.
I am doing another RR soon in which you pick your own project and theme based on a focus fabric. You do a whole block based on your fabric and theme, then send the focus fabric and your finished block on to the others so they can carry on with your theme. I have a feeling most of the others in this RR will be saying " What the Heck was Lauri thinking?"
All in all I am happy with the work I did. The Wicked Witch is a silk that I printed out. The broomstick treatment was fun. I had a bit of a time getting the tornado figured out. Wanted to add a cow charm to it but I couldn't find one. So if anyone who works on the block after me has one feel free to add it. Then I embellished the heck out of the print on the fabric, adding the barn ,the house and the corn. I have to say, I've been to Kansas and yes they have hills but not quite like those. Looks like NW Missouri to me
I hope Leona likes it
Off to work on Faith's ( I think) Peter Rabbit block. It is getting pretty full so I will really have to do some thinking on it
Later,
LAuri
Posted by Lauri at 8:34 AM 4 comments: 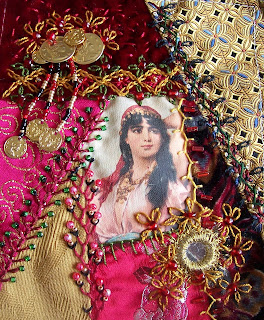 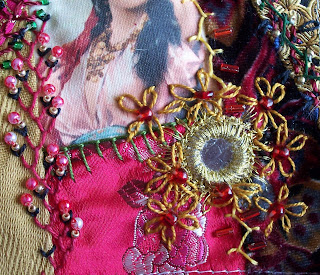 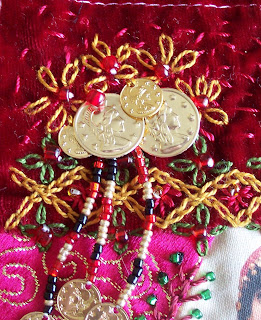 Hello All
Here is another purse I am working on. I have a thing for beaded tassels this is about the 4th or 5th one I have done lately.
This one stretched me a bit. I normally work in purples, blues and pinks. But if I want to sell them I need to appeal to a larger group than the purple fans.
Later,
LAuri
Posted by Lauri at 12:46 PM 6 comments: 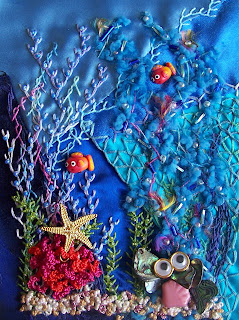 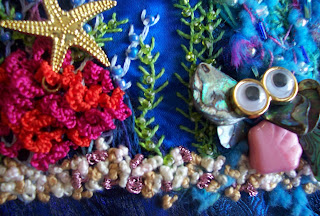 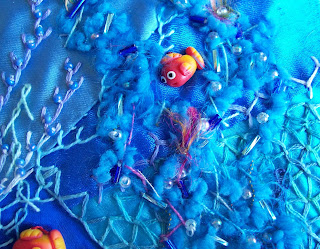 
Here's what I have been working on. It is a cellphone purse. It's not quite done yet. I want to add some seashells that have, but haven't figured out how to attach them. I was thinking of buying a Dremel tool and using an extremely small drill. However if it doesn't work, I'd be stuck with something I wouldn't really use.
I am very happy with how this one turned out. I have wanted to do this theme for a long time now. I see (sea) where it could be addictive 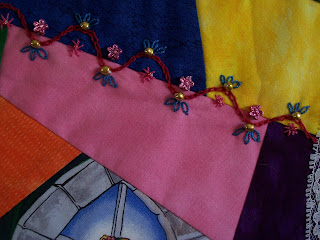 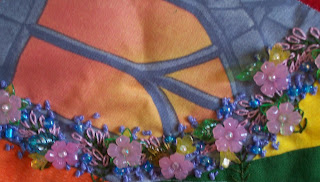 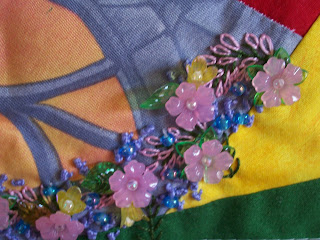 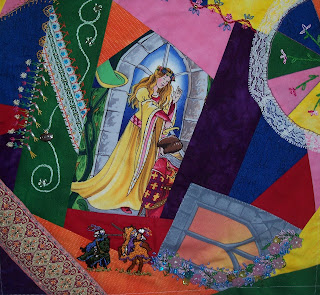 Hello All
Here are some pictures of Teresa's block for the Fairy Tale Round Robin. She chose Gueniver. Since I am a huge Renaissance geek this one was really easy, I could have finished the block all by myself. However I showed some restraint and left room for the the 4 or 5 people after me who will work on the block. The knights are about 2 inches high and are so dense they almost look like an applique. The others show the rest of my contribution and everything else you see on the whole block was done by Rebecca and Gerry. I hope that Teresa enjoys it.
I got another block in the mail today so I need to get going on it as we are moving at the end of the month and I have lots to do before then. I love the new house but moving 6 people plus 2 dogs and 4 cats and all the household plus 5 vehicles is not my idea of fun.
Later,
Lauri
Posted by Lauri at 1:41 PM 2 comments: