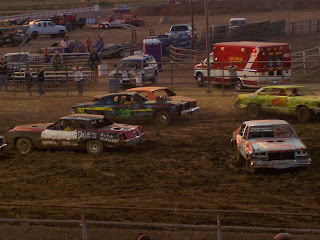 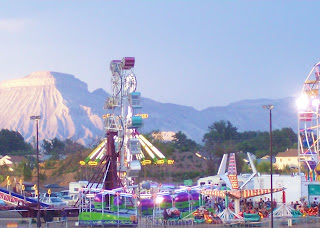 Hello All
We have really gone to white trash since we moved to Cowboyland. For those of you who live an urban lifestyle or more sophisticated one, the above pictures are of a Demolition Derby at the Mesa County Fair.
What can I say, it was fun. Watching all those cars bang and crunch into each other. Car parts flying, engines smoking, mud flying and an occasional car fire.
The brown car in the middle of the 4th picture, an OLD Imperial won. There's alot to be said for Detroit steel as opposed to foreign pot metal cars.
What more could you want out of a Summer night?
Later,
Lauri
Posted by Lauri at 1:33 PM 3 comments: 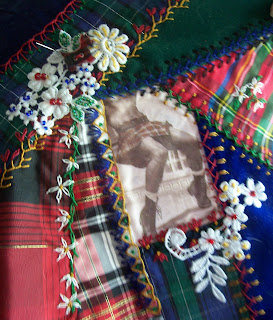 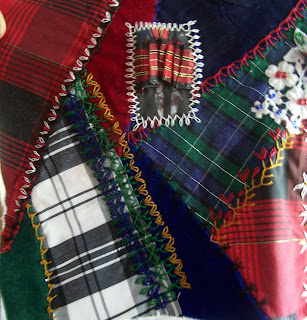 I have been a slacker lately. I was waiting for some beads to arrive for Nancy's block for the Fairy Tale RR. Of course, when they got here they wouldn't work like I wanted so I will have to rethink my options.
This is what I have been doing while waiting. It is a surprise for someone I met through the Internet. A while back she said that I needed to show some eye candy for the women out there. So here it is. I know it's a LITTLE wild. LOL. Mixing plaids and getting seams to show up on them isn't easy. I did not want to include any white, but the only way for the little Scottie show up was to put him on a piece of lace. So I had to add it in several places to get it to blend better.
The second picture is of the back. If you lift the kilt in the framed piece, there is a bonus. I don't think the recipient will object. I know I would have to be careful with some ladies out there, but she seems to be a little out there like me so it should go over well.
I need to add some more beads to cut back on the starkness of the white. I will post pictures when it is all done.
In other news ,I am just waiting to see if the Navy will be sending my middle son back to me. They found out within the first week he was there, that there was something off on an ECG he took as part of his psychical to get his " fit for duty" stamp. Of course we didn't find this out until Friday, the 20th. ( He left June 27th!) Yesterday he was to go to the Cardiologist to see what the problem is. Still haven't heard from him so I guess , he is staying. Maybe. I don't know. The military is SO frustrating and slooooow. He'll probably just call from Denver one day saying to come get him. Who knows?

Here is the last picture I promise of all my Egyptian blocks. I had the seam treatments done over 1 1/2 weeks ago. But could I leave it here ? NO!!!!!!!!!!!!!!!! I had to go for the beads. I just can't seem to leave them alone.
Lesa and JK at the CQ for Newbies site have promised that there is a new swap coming up and it will be exciting. I hope so. I am really not a flower person so nature themed blocks don't appeal to me. Maybe it will be a Renaissance Swap, I could do 10 of those or maybe a fantasy one . I could do dozens on that one.
I guess I'll just have to wait and see
Now I am on to Nancy's 12 Dancing Princesses block. I have LOTS of ideas for his one and lots of block to cover

Email ThisBlogThis!Share to TwitterShare to FacebookShare to Pinterest
Labels: swap 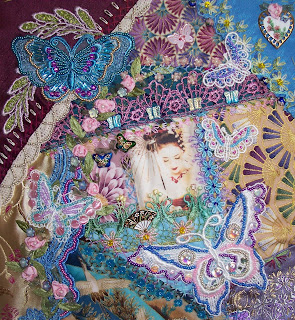 Here is the finished product. Ann said she wanted glitz, so here it is. It took 4 days to bead this little dude. I just couldn't help myself, I just kept seeing more places to add.
I hope you enjoy it Ann!
Later,
Lauri
Posted by Lauri at 8:31 AM 6 comments: