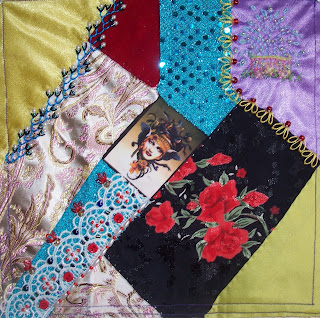 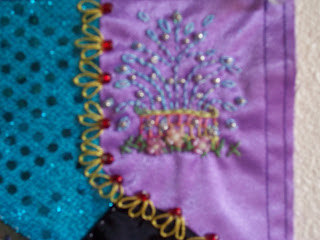 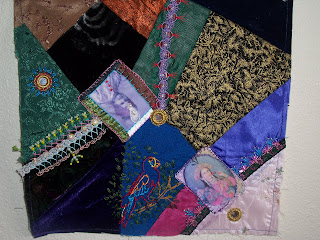 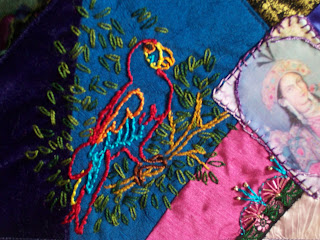 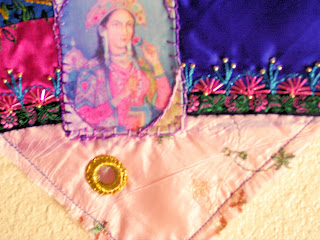 I am sorry it's been so long since I posted. We loaded the new Vista operating system to my computer. It runs great, however my new printer, scanner,copier which happens to be a HP and is less than 5 months old won't connect to the new operating system.HP decided not to make the neccesary software changes even though Microsoft sent them all they needed so new printers would be compatible. HP managed not to get it done on time like every other manufacturer. I guess that is why Microsoft is sueing them.
I have been working on some blocks I am doing for the CQfN Fairy Tale Round Robin.I have also finished one of my cell phone purses.

My camera is not taking very good pictures of my CQ stuff. It does great at anything else but not what I need it most for.

So I have posted a few pic. I apologize in advance for the poor quality
The first 2 pictures are of Gerry's block, The Ugly Daughter. I decided to do the fountain from the story. I was going to do some snakes and toads but I just don't do creepy crawlies well. I think the fountain turned out well .I used Watercolors thread for the fountain itself and for the water, then I added some silver beads to make the water sparkle. I also did the turquoise and black seam in the left corner. I beaded it with blue beads and pearls. It is meant to look kind of creepy yet compelling at the same time
The last 3 pics are of Rebecca's block. How the Raja's Son won the Princess Laban. I added the parrot, he is done in a heavy rayon thread. Next the black trim was added along with the turquoise and pink beaded seam treatment above it,The shiskas were added because the lavendar trim that Gerry had added was fraying.
I found an easier way to add the shiskas. I will let you know how that turns out.
All the other work on the block including the siggies were done by Gerry. I think she got it off to a great start. Now to send this off to Nancy. Then I have 2 more RR blocks to do before I can get back to the purses I am doing.
Later,
Lauri
Posted by Lauri at 11:49 AM 1 comment:

Bags in the Works 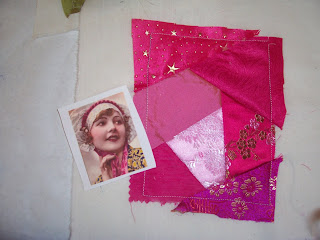 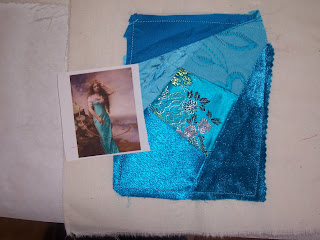 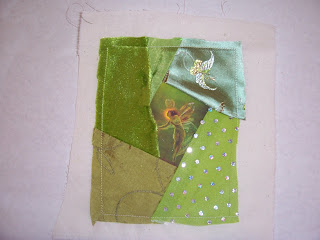 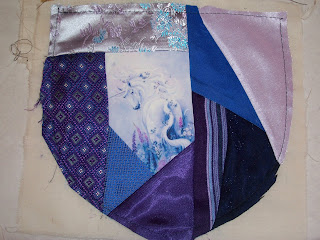 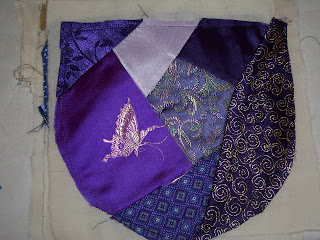 I have been thinking about doing some business on Ebay. These are to be CQ embellished bags or purses. The first 3 will be ones to hold a cell phone, ipod,mp3 or even a smaller digital camera. They will have a strap that will be long enough to go over your head and hang down in front, a sort of neck pouch.
The next 2 are to be bigger purses they are about 10 inches wide and 9 inches high.
I will post more pictures after I get them embellished and finished.
I think it's about time I start making some money after my stash. LOL. I know my husband should would appreciate it!

I know it's been a while since I've posted. I have no real excuse. You know how life goes sometimes.

First up are some laces I have dyed. The first 2 pictures are of laces dyed with Ribbonsmyth dyes. I really like these. The only problem with them is that the only blue they have really stinks. It is called English Blue, it is really more greenish grey than blue. So they blues you see are ones that I used food dyes and vinegar with, These really tend to bleed and fade and are not colorfast at all. I need to find a good blue microwave dye. So if you know of any please let me know.
The next two pictures are laces that I painted using fabric paint. You get great colors with these, however it tends to be stiff when dry. They must be very diluted with water and painted lightly in several coats, As these are intended for purses I don't think it will make as much difference since they won't be in as much contact with the skin as compared to clothing.
You will see in the last 2 pics I ahve some VERY bright greens.Don't fear, there is a plan for them. I am going to use them in some tinkerbell bags.
My friend Janet and I dyed a bunch of lace here at my house the other day. I think I have her hooked.It wouldbe so easy to spend days dyeing lace.
Well off to do some more
Later,
Lauri
Posted by Lauri at 11:51 AM 4 comments: